Abstract art: the difference between looking and seeing

Sometimes the best ideas come from a meeting of minds… and at the RBSA, a broad and diverse membership is actively involved in curating exhibitions.

Abstract shows are something of a rarity at the RBSA, so a group of artists decided to collaborate on a major exhibition.

Equivalent 8 came about from a wish to show that abstraction is not just alive and well, but thriving. 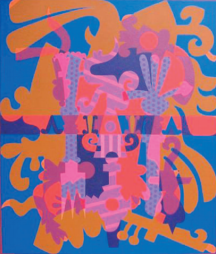 The title provocatively takes its name from the famous pile of bricks at the Tate which caused uproar in the sixties. Steve Evans, one of eight artists producing eight abstract works for the exhibition, said:

‘With Equivalent 8, we wanted to draw attention to the fact that there are abstract artists within the RBSA.

‘Fellow artist Mike Sadler had the idea. He was stewarding as a volunteer, and we got talking. We all know people who say they don’t like abstract art, but to get beyond that you have to consider that no art is truly ‘real’ – everything is an illusion.’

Steve is instinctively drawn to abstraction. A visit to the Tate as a young man left a lasting impression: ‘The things that struck me the most were Ben Nicholson’s White Relief works and Nuam Gabo’s elegant Perspex and nylon constructions.

‘What strikes me about the work of all these artists is movement and their approach to the use of colour.

‘Bridget Riley manipulates colour, and has regularly cited Seurat as an influence. She was fascinated by how he achieved colour on the canvas by the juxtaposition of dots of constituent colours.’

Steve is often frustrated by the public reaction to abstraction, but believes the only way to tackle it is to engage people and put on more shows.

‘There’s a difference between looking and seeing. When I’m looking at abstract art, I find it’s best to just let things happen.

‘I like music and art to challenge me. I want to make up my own mind. If we only appreciate something just because we have been told it’s good, aren’t we missing out on something?’

Steve worked as an engineer in building design for many years, and sees how it informs his art: ‘I tend to have a more literal starting point because of my professional background. Abstraction means ‘To take from…’

‘When I’m juxtaposing circles with grids in a painting, you could argue it’s a mechanical process and that I know what will emerge.

‘But the surprises are in hand-drawn inconsistencies, the effects the colours will have, and also in trying to get movement into a work.’

Steve Evans, ‘Circle in the Round’

Steve has seen people experience an epiphany in relation to abstraction.

‘I was at a contemporary art museum once with a friend, staring at an Ad Reinhardt, and she said ‘It’s just black,’ to which I replied ‘Well, what black is it? There are a host of blacks.’

Then she said, ‘Oh my God, it’s blue-black down there, and red-black up here… it’s really clever!’

‘I want to achieve that with someone looking at my work.

‘Another friend told me once, in Rome, ‘I don’t go to art galleries.’ But he joined me at a Rothko retrospective, and Rothko’s works are massive, I mean they overwhelm you.

‘Afterwards, when we came out, he said: ‘I shall make a point in future of going to an art gallery in every city I visit.’

It runs alongside our major William Gear exhibition Colour and Form: William Gear 1915-1997, from 30 October to 18 November.

A Celebratory Open Day takes place on Sunday 5 November, 2-4pm to mark the opening of our Equivalent 8 and William Gear exhibitions.

There’s also a Saturday art demonstration with Equivalent 8 exhibitors on 18 November, 11-1pm and 2-4pm. Free, no need to book.

What's On at the RBSA Gallery in October

Art and Wellbeing: How to Harness the Healing Benefits of the Arts

What’s On at the RBSA Gallery in September